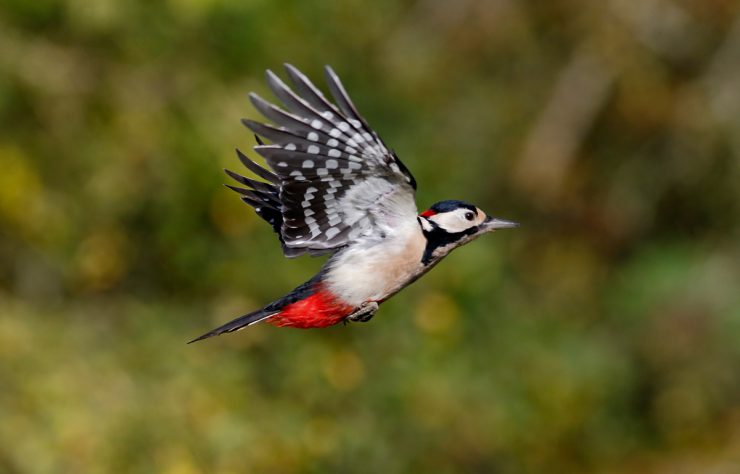 The Great spotted Woodpecker is classified under the Dendrocopus Major in the family of Picidae. These birds are found throughout Europe and Northern Asia. The size of these birds range from 23 to 26 centimetres and has a wingspan of 38 to 44 centimetres. The upperparts of these birds tend to be black in colour while the white colour persists on the sides of its face and near the neck.

These birds also have a blackline that runs from its shoulder to halfway along its breast and returns to the nape. These birds have a black stripe extending from the bill and runs below the eye to meet the latter part. The shoulders of these birds have a large white patch. The flight feathers of these birds are black and white in colour. It is often seen that when the short tail of these animals are outspread the outer tail feathers are visible of these animals which acts as a support for them in climbing. These birds have a dull white in colour in its underparts while their abdomen and their undertails tend to be crimson in colour. There is a crimson colour spot on the top of their nape which is especially seen in the male birds which is quite absent in the females and the younger breeds.

The younger breeds have crimson on the top of the head and which is present between the bill and in the centre of crown. The bird is easily identifiable as it has a large white patch over its shoulder. It is often identified by its voice of mechanical drumming and has a vibrating rattle which is reproduced by repeated blows of its strong bill upon a trunk or a branch. The voices of these birds are quite audible from a great distance which also does depend upon the wind conditions and on the condition of the wood too.